It was a bit anticlimactic, though.  After two years of ugliness and torture, my teeth didn't really look too much different from when I started.  I looked back through my old Facebook pictures, wedding photos, and other images stored on my computer, and my teeth always looked passably straight.  Now, with my newly-renovated mouth, my smile looks no different from before.

The whole process started that morning, when I was escorted into the "private suite" where I had first gotten braced in 2011.  I sat in the chair, and the orthodontist assistant started to crimp the metal brackets on the lower arch.  It hurt, although she had assured me it wouldn't.  Soon enough, though, all 13 brackets were off and my bottom teeth felt rough from the leftover adhesive.  The orthodontist then came in to remove the ceramic brackets from my upper arch.  He used a little drill to break the adhesive around each bracket and then used the same little crimper/pliers to pop those brackets off.  Then, he buffed off the adhesive, and left the assistant to polish my teeth and continue on with the rest of the process.  She mixed up the same gloopy molding compound to make an impression of my upper and lower arches, sent those off to their in-house lab, and had me go to the front of the office so she could take photos of my teeth.  While there, I had another Panorex x-ray done, and then she took a bevy of pictures.  Then, I was told that my retainer would be ready that day because they create their Essix molded plastic retainers in-house.  However, since I live 20 miles from the orthodontist's office, I was given the option of either waiting in the city until they were done, or having the orthodontist assistant drop them off at my home (she lives halfway between the two locations).

After my appointment, my husband took me out to eat at my favorite restaurant, and then we bummed around until my retainers were ready to be picked up.  I put those things in right away and had to learn how to talk with a mouthful of plastic.  I have to wear the retainers 24 hours a day, every day for a month (except for eating), and then back off to just wearing them at night for 12 hours.

I'm not really happy with the results.  One of my canine teeth appears to have died during treatment, as it turned a noticeable grey at some point within the past 2 years.  I believe it's because when the premolar was being derotated, both it and the canine tilted so much that their roots were starting to press through the bone.  Both teeth became severely sensitive to cold, to the point where I couldn't even breathe over them without pain.  The orthodontist put an adjustment in the wire to tilt them back, but I think the damage had already been done.  They don't hurt anymore, but the grey tooth barely responds to any stimulus.  I'm $5,500 poorer and look no different. *sigh*
Posted by Erin at 10:05 AM 5 comments:

Every other Saturday morning, my husband and I go to a small bakery that's been serving the area for over 100 years.  We've been doing this for long enough to be recognized as regulars (though not as regular as some, like Ted, a supremely cantankerous, wheelchair-bound octogenarian who stops by daily for coffee and toast).

My husband and I have constantly joked about never being allowed to go behind the counter, in spite of the numerous people who wind their way around the display cases to get into the back of the store.  Most of them are employees, but some are patrons.  The store's bathroom is somewhere in the back, though in spite of my drinking 4 generous cups of coffee every time we visit, I've never dared seek it out (I almost peed at the carwash because of this, but that's another story for another post).  Last Saturday, the woman working behind the counter said, "Hey, Erin, I want you to come back here for a minute."  I replied, "Really?  I actually get to go back there?"

I walked past two glass cases filled with Easter cookies and walked into the surprisingly generous back of the bakery.  The room was monstrously huge, filled with industrial mixers and huge wooden tables, and illuminated by an old light-up beer clock on the far wall.  There was a fine patina of flour on everything, and the floors were the original 1900s hardwood: long, narrow planks, almost bare in appearance.  The lady who beckoned me back gestured to two black plastic garbage bags on the floor and said, "Do you want to take a look through these?  They're full of expensive clothing."

She opened the first bag and started pulling out shirt after musty shirt.  Evidently, her idea of "expensive clothing" was St. John's Bay, Lands' End, Arizona, and Merona.  Even more puzzling was the fact that she thought I might be interested in the items in the bag: plain t-shirts in every size from M to XL, enormous bouclé sweaters, maternity jeans, and various items I couldn't get away with wearing unless I was pushing 80.

"Are these things you're taking to Salvation Army?" I asked.

She replied, "No, the woman who dropped these off, well... she didn't want to give them away, you know?  She gave them to me instead.  They were her mother's, her mother who just died of cancer."

OH GREAT.  I've spent the last 10 minutes rooting around in a bag of a dead woman's clothes.  I found two nicer sweaters, so I folded them and set them on top of one of the bags.  I really had no intention of taking anything, but I wanted to at least make it look like I was kind of interested.  I walked back to my table and my husband noticed my grimace.  I gave him the abbreviated version of the story, while vigorously rubbing hand sanitizer all over my hands.  He said, "Well, they're free clothes, why not just take them?"  So, just before we went to pay, I slipped back and grabbed the two sweaters I had set aside.  We brought them home after our day of running errands had drawn to a close, and I threw them in the hamper.

Yesterday, my husband went to do laundry and while he was emptying out the hamper, I heard him exclaim, "AHH!  Dead woman sweater!" ಠ~ಠ
Posted by Erin at 1:29 PM 1 comment: 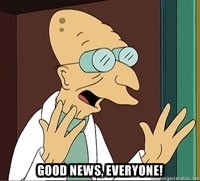 I had an adjustment this morning and the orthodontist finally gave me a revised estimate of 2-4 months!  As you can imagine, this makes me a happy panda knowing the end is in sight.  To celebrate, I had a hazelnut macchiato and piece of chocolate cinnamon bread from Starbucks (and evidently can't have any more sugar or saturated fat for the rest of the day, but oh well.  They were delicious).

I had to have a double power chain put on this time to help close up my stubborn gap between incisor and premolar, and my teeth haven't yet gotten the message that this is going to hurt, big time.  In case you don't know about doubling up on power chains, they remove the wire, put a power chain on the bare brackets, reinstall the wire, and then put another power chain over that.  If the previous adjustments with a single power chain are any predictor, my teeth will hurt for about a week.  At any rate, the time immediately after the adjustment is good if you're a dieter, since you'll be forced to eat nothing but soft foods (of course, there is the fact that ice cream is soft, and that definitely doesn't help).
Posted by Erin at 1:05 PM 1 comment:

My all-time favorite purveyors of goofy stuff, Perpetual Kid, always has a lot of fun coffee-related accessories.  I love this tiny coffee creamer pot, pictured above.  I'm not getting any kickbacks or commission from sharing these things with you -- I honestly just like this company (but, you know, if you wanna buy me anything from Perpetual Kid, I won't complain).


Check out some of the other cute coffee paraphernalia they have to offer:

I haven't written anything about my braces since July of 2012 because nothing has really changed.  I've had them on for 16 months now and I suspect I may have them on for the rest of my 20s.  The orthodontist gave me the same estimate of "5 more months" 3 months in a row, and now won't even comment.  They're trying to close a very recalcitrant gap; plus, my midline is waaaay off and my molars don't occlude properly.

I'm just so sick and tired of wearing these stupid things and there's no end in sight.  I think the orthodontist lied to me about the treatment time, too: at my consultation, he said "12-18 months", but put "18-24 months" in my file.  In that case, I'm not even close to the lower end of the treatment time.  I really don't think my teeth are going to look a whole lot better than they did before I got braces, considering they weren't particularly crooked to begin with.
Posted by Erin at 12:10 PM 2 comments:

Are you following me on Twitter? Huh? Huh? Well, are you?

Pick a card, any card